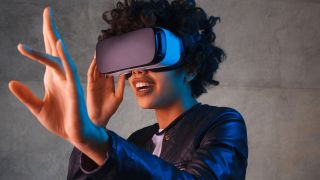 The patent details about the finger gestures as well as the visual touch detection. Figure sketches have revealed the working of this system. Although pictures and details have been leaked, the Apple-patented system is still new and in its early stage of development.

According to the rumour, Apple’s first headset is to make an entry in the beginning quarter of the year 2022. Bloomberg sources have claimed that since multiple issues have risen in its development, the suspected date might be delayed if further concerns arise till then. Moreover, the Apple VR headset is supposed to be really expensive – till around $3000. With this whopping cost, begin to save pennies from today so you may invest in this priceless gadget afterward!

The new Apple VR headset might weigh only 150 grams. Making it even lighter than the Oculus Quest 2.

With Dual 8K display screens, the headset will be able to provide 7680 x 4320 resolution. That’s much better and sharper than any other device presently in the market. For example, the Valve Index VR headset uses two 1440 x 1600 pixel displays only.

So with the complete 8K resolutions, the battery of the gadget will quickly go down the drain. To avoid this drainage, Apple has a solid plan. There is eye-tracking software embedded in the set that will follow where the user is looking and only that particular portion of the screen will be activated. Another part will become blurred to save the power.

This technique is a way used by gadgets to detect the world around them. Apple has previously used this type of scan feature in iPad Pro and the iPhone 12 Pro/ Pro Max. LiDAR uses laser technology to determine the distance and depth of objects. Particularly useful in AR, it can allow a device to accurately map a virtual image to a real-life object.

As stated earlier, the Apple VR Headset is a controller that can track finger movements. The user can input/output a function through the gestures of the hand.

SO you just read all about the Apple VR Headset Details and Features. This information is as per the details either leaked from inside sources or officially disclosed by the company. The gadget seems really promising, especially with its finger movement identification feature and 8K dual-screen displays.